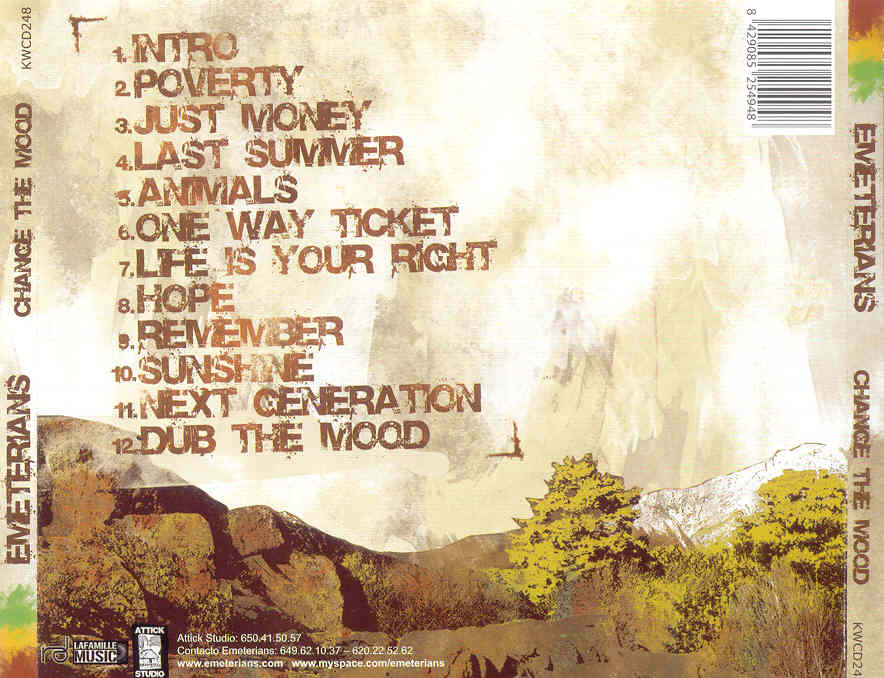 "Change the Mood" (Lafamille music 2009) is the second album of Emeterians, the Roots Reggae band from Madrid.

When you include the introduction tune, "Change the Mood" contains 12 titles, wherein the whole traditional line-up is present, from the riddim section to the horns and from the backing vocals to lead voice. It's clear, though, and not just by reading the liner notes, that the band does include a Dub engineer as a member, a thing which did not used to be so when Reggae Bands predominantly were studio bands. It's just a thing which makes it clear that this is not a recording for what some preterists would call "golden age of Reggae", a term which is rejected as a whole here in the Dubroom.

Not in an annoying way, though, but it's there too: another contemporary thing, it's a thing called "rap". No, it's not all over, there's just a little bit here and there, which is fine just as long as it's not too long which is not the case with the Emeterians.

A thing which is there on the album too: skillful DUB mixing, in a way that is not just popular inna Europe and the UK but a more traditional manner which does show very clearly how right Pablo Moses was when he sang his famous "To Enjoy Reggae Music, Dubbing is A Must".

The sound is clear, even though not as clear as when everything would be done digitally. It's the charm of the analogue sound, well apreciloved, well accepted, very much respected!

"Change the Mood" is truly already a classic for the online (DUB) Reggae massive, even though the album was released this year.

Get it, Play it, Experience it!